Are there emotions that you resist feeling? What emotions and why?
What are you grateful for?

I am grateful for
The tears,
For the courage to feel
The sadness and the pain.

I am grateful for
My present aloneness.
No one here
To hinder me.
Most so scared
Of emotions,
They censor themselves
And energetically push
To inhibit others.

I am grateful for
Clearing the blocks
Ever deeper.

I am grateful for
The freedom and aliveness
Earned from feeling.

I am grateful for
Muck out of the way.
I break through,
And feel joy.

My gratitude expands.
I am grateful for
My sweet, purring fur ball, my little cat companion…
My abundantly fruitful citrus trees that grace my backyard…
My family of choice who embrace me with their love…
Those who are open, listen, hear and receive…
The community that supports me to heal, learn and grow…
Living in a space and time that grants me abundance…
Markets with copious variety of foods…
Ease of transportation…
My awesome home in the mountains…
My access to clean air and energy…
The gift of words…
A dynamic body…
Creative abilities beyond imagination.

Posted by Bibi Caspari at 12:22 PM No comments:

We can only get where we want to go by first admitting where we are. Sometimes that isn’t a pretty picture but the truth of knowing is what can give us some of the information and power needed to change. Where do you want to go? Where are you now? How can knowing where you are empower you to get where you want to go?

Weak from toxins,
The canary
Is struggling to sing.
The miners ignore
Or dismiss her.
Too busy with their lives
And thinking they are different.

“Poor thing.
So vulnerable.
Not me;
I’m different.”

The toxins are invisible
So the miners
Who are insensitive
Don’t consciously feel or notice.
But unbeknownst to them,
The toxins are killing them slowly.

The canary sings of the mockery
Of the pseudo-trees
That are noxious.
In contrast to real trees
Which give life.
She sings of other dangers,
But is ignored.

The world, so toxic,
The canaries are threatened.
Perhaps to become an endangered species.
With the unconscious others to follow,
Perhaps in short order.
(Though another story may be told
Of canaries surviving
Due to their awareness.
Finding a way to fly away,
Finding a way
To protect themselves.)

Another says:
“These aren’t toxins for all of us.
We’re evolving.”
If so
A myriad suffering and dying
Is the path to that future,
So that a few
Who “evolve”
Might survive.
Survive to find the loneliness
Of a world that has killed most life
With the refuse and poisons created
While the "evolution" occurred. 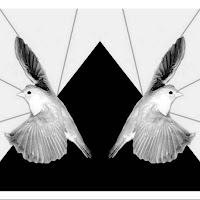 Such a future looks bleak
Though perhaps
As time passes,
More will come to know
Of the dangers.
The butterflies flapping their wings
In concert with the canaries singing
May create an effect
Around the world.
A butterfly effect
May trigger changes that can alert enough
To have them wake up
And make the conscious alterations
Needed to save us all.

In what ways do you or don’t you fit in with others? How are you “odd”, different, unique? 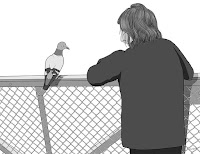 Walking my bike over the narrow foot bridge
That crosses the LA River,
I see a man leaning on the railing
Looking at the water and wildlife below,
A pigeon quietly sitting at his elbow.
He not feeding her or making other overtures.
Just companions for each other.

I slow my pace,
Wanting to not frighten the bird,
And remark to him about his feathery friend.
“She’s here every morning.
She doesn’t fit in the flock”,
He says with a smile,
“And neither do I.”
So it’s their morning ritual
To keep each other company.

“We odd birds need to hang out together”
I say to him.
He smiles, and nods.
I smile and continue on my way.

Do you ever feel frustrated? About what? How can you handle your frustrations in a proactive, positive manner?
How can you be present to and pragmatically work toward your dreams in such a way to constructively handle the obstacles that are in the way? What resources does that involve?

Feeling frustrated.
Wanting more time
For projects
I’m dreaming of
And working on.
Cherishing how,
Through my work,
I contribute to others
(Or so I believe) -
Supporting insights, inspiring, motivating -
While contributing to myself.
Yet busy with other tasks
And demands.

Carrying gray water
From my kitchen sink
To the backyard
To water the plants.

What if this were my job?
And all else
A gift of love
I give myself and others?
I love being outside,
And transitioning
From inside to out.
I love my plants,
And conserving water.
The moment expands.
All that exists is carrying water
And the plants I love.
What bliss!

It seems one of my callings,
To beckon
To point out
To urge
Others to see
What they may not want to.

People usually don’t want to wake up.
(I often don’t.
When people call me on my stuff,
I generally resist.)

But pruning is good.
If a branch needs pruning,
It being gone
Supports growth and wellness.
With an arborist's vision,
I perceive
The strength, beauty and fullness
The tree could have
If pruned and cared for properly.

It pains me to see
The sickening of the tree
With too much to support
And some of it diseased.
Pruning is good.
And feared by many
Who don’t want to change
And won’t let go.

And knowing it’s needed,
I proceed with courage.
An empath,
I hurt myself
While pruning.
So I wail the blues
And the singing helps.

Fearful, too,
Rarely certain.
Am I making a mistake?
Am I cutting the right branch?
In the right way?
Will I go too far?
Will I kill the tree?
But if I don’t prune,
A heavy branch may break
Or the tree may sicken and die.

Fearful, too,
Of possible backlash,
Or being pruned.
I want choices to be mine
Not decided by another.

I’m not always right.
(Though often I am.)
The orange and lemon trees
That grace my backyard
And prune almost yearly
Are healthy and fruitful.

I opened up
To a new man in my life,
And he slammed me.
I offered
A mirror for him to see
What needed pruning
If he chose to do so.
He was blind, deaf and dumb.
So I let it go.
I let him go.
I moved on.
Pruning is good.

Those who don’t want to
I may prune from my life.
Pruning is good
Supports growth and wellness.

Often valued
This work I do,
Though it may take time.
“To my greatest teacher
Of life, love and growing up.”
The writer wrote to me
Years after we split
As an inscription
In the front of
The book he authored.

Another asked for
Gentle pushing;
A kind of pruning.
So I did.
Initially resisting,
Then thanking me.
“You pushed me to grow.
I’m better for having you
In my life.
I was really lucky.
I had a good mentor.”

Posted by Bibi Caspari at 4:10 PM No comments:

Because of people’s judgments of me (I was too emotional, too outspoken, too whatever), I used to hide parts of myself out of fear of being rejected. Then I decided to move past those judgments and dare to more fully be who I am.
Are there parts of yourself that you have felt a need to hide? What parts? Why have you hidden those parts? What cost and pay off might there be in revealing those parts?

Are you ready for a woman
Who howls at the moon
Full of her passion
Feeling the pulse of life
Coursing through her veins?

Are you ready for a woman
Who wails with grief, her own
Or the torment of feeling
The pain of both Mother Earth
And Her children?

Are you ready for a woman
Who is radically honest,
Who looks and dives into
The shadow as well as the light
And speaks her truth of both?

Are you ready for the challenges
Of facing your fears
As she names the demons that you house
Or the dark places that you resist looking at?

Are you ready for a woman
Who jumps off cliffs
Following the path of the heart
Daring to live authentically
Risking endlessly
Stepping into the unknown?

Are you ready for a woman
With such a huge capacity for love
That she opens an oceanic embrace
Deep and wide
For you and others?

Posted by Bibi Caspari at 5:12 PM No comments:

This exuberant, passionate child -
Angry, hopeful, joyful, frustrated.
I/She wants it all
Have, do, be.
No reasoning with her
About the impossibility.
Her passion so huge,
Impossible is not a word she knows.
I love her dearly
And find her passion difficult.
Too much.
Overwhelming.
Impossible.
And yet…
On the other side,
Miracles exist…
The Universe is curved
And parallel lines meet.
Nothing is impossible?